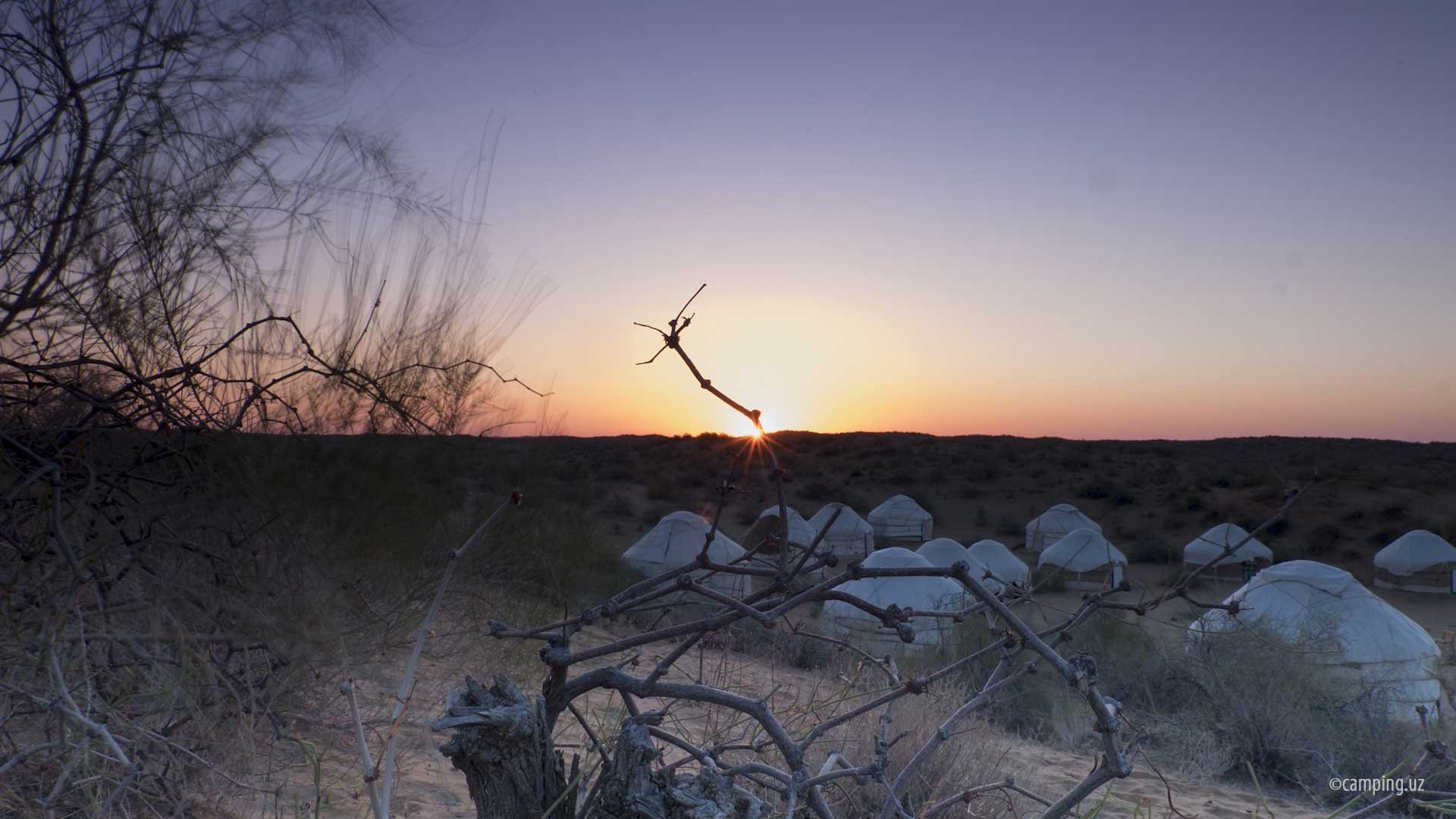 It is always a great idea to spend your time at yurts camp! Twenty holiday yurts are set in the “Sputnik Navoi” yurt camp in Yangi-Gazghan, near Nurata city. Yurta – it is not like asceticism. The yurts are decorated with hand-made carpets and shirdaks (stitched, and often colourful felt floor or wall-covering) of local skilled craftsmen in unusual rich entourage. Woven patterns and even lustres make the pleasure atmosphere. The ecological yurts are very clean; they are made of simple nature materials, such as wood, thick felt and poles, rolled from the fleece. It is cool in summer and warm in winter in the yurt. The construction is always developing. It is easily built and taken apart for one hour. The yurt of one family is removed on two horses or camels. The yurt camp is equipped with a stationary toilets and shower. You can spend the evening by the campfire, songs of the local akyn, admiring the calm atmosphere that is difficult to catch in a noisy city. One can make wishes during the star falling.

In the daytime, you will be able to walk around the camp and ride on camels, which are specially trained. Having made 1-2 hour camel ride, you will see the inimitable in its beauty lake Aydarkul, which stretches 250 km. along the desert. Here you will have a chance to taste fresh fish, have a rest and even swim in warm waters and get a tan on the sandy shore.

The visit to the lost village, where local people saved ancient traditions and way of life, will deeply impress you. 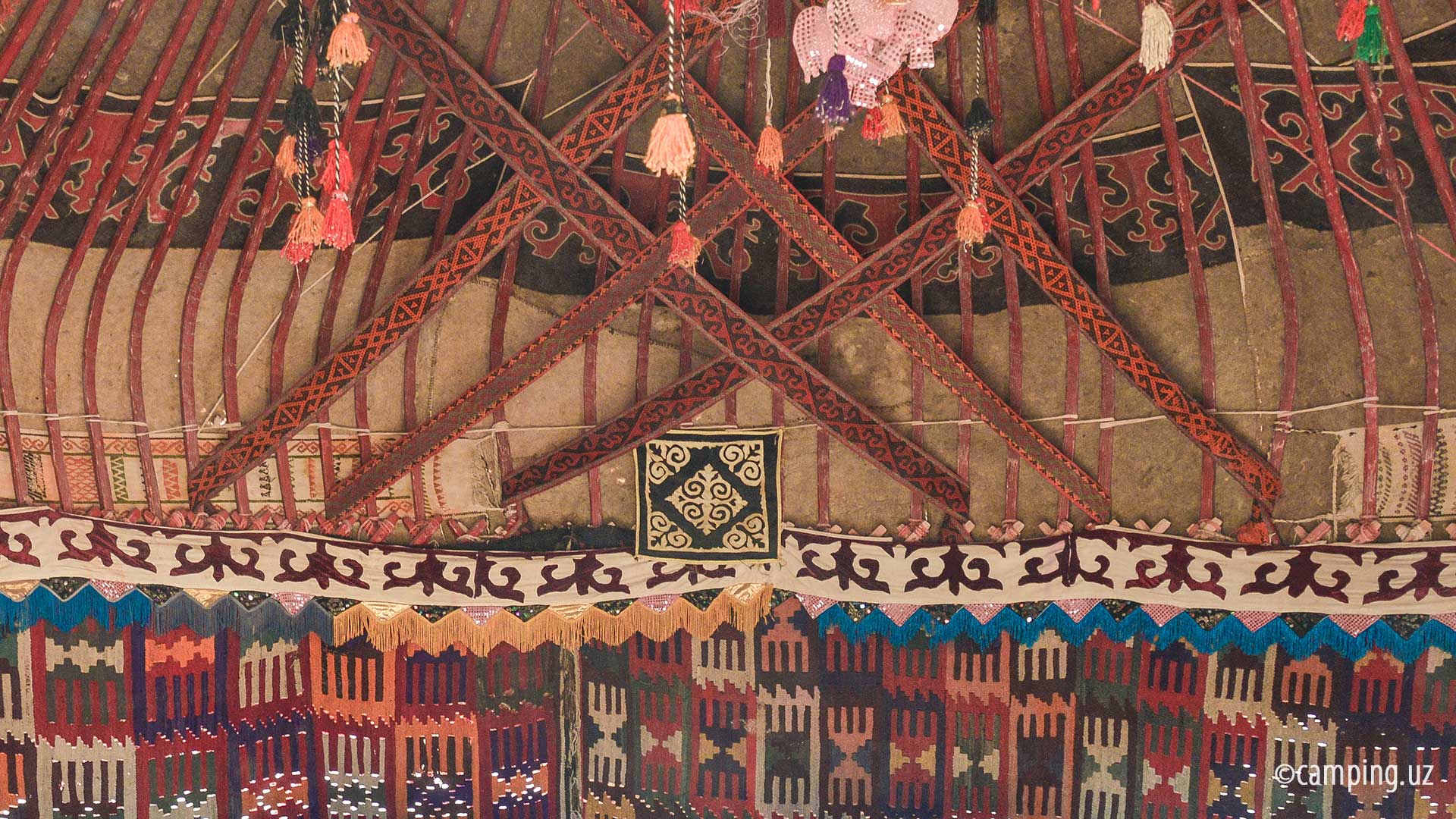 Yurt camp every year becomes more and more popular, taking here tourists from all over the world who come to see world famous monuments of Uzbekistan. Employees of embassies and international organizations, joint ventures and their guests happily come here to relax and spend their "weekend" away from civilization. Many of them bring their children here, who discover another unknown world for themselves.

The yurt camp is also equipped with stationary toilets, showers with plumbing fixtures, pavilions, a yurta in the wardroom where lunches and dinners are held. The camp is provided with electricity. It is possible to install heaters or fans and cots in yurts on request. There are three tandyrs for making flat cakes, somsa and lamb (tandoor kabob). Demonstration of cooking these and other National dishes.

Breakfast at the yurt camp. Try camel riding experience. Move to the Aydarkul lake shore. Have picnic at lakeside. Drive to Bukhara. Stop at Rabat-i-Malik caravanserai. Visit pottery masters workshop in Gijduvan. End of the services.

Meet-up at the hotel in Bukhara. Drive to Nurata. Visit pottery masters workshop in Gijduvan. Stop at Rabat-i-Malik caravanserai. Visit "Chashma" memorial complex and ruins of harnisone of Alexender the Great. Lunch at l/r at Nurata. Drive to Yurts Camp. Rest. Dinner at camp. Enjoy singing of Kazakh akyn. Overnight at yurts.

Breakfast at the yurt camp. Try camel riding experience. Move to the Aydarkul lake shore. Have picnic at lakeside. Drive to Samarkand. End of the services. 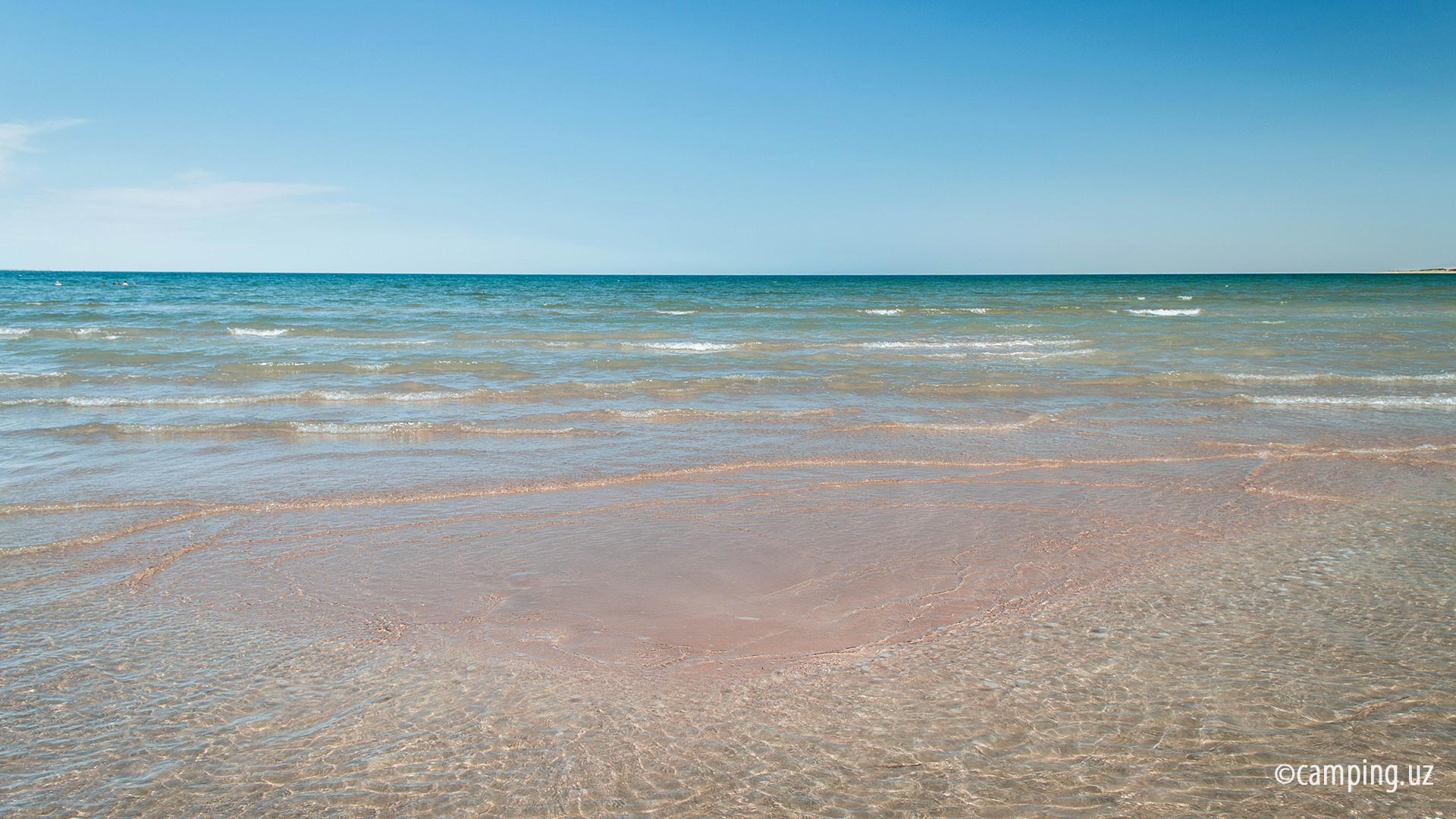 Aydarkul - is situated in north-eastern Uzbekistan, about 50 kilometers from the city of Nurata. The lake is located in an almost uninhabited area, its neighborhood inhabited only by 345 families. It is oddly enough but for its appearance we should to thank the disaster - catastrophic floods of 1969, when flood waters of Syr Darya spilled Syr Chardara reservoir filling the saline depression, which served to drain the drainage water, and formed Aydar Arnaysay - water system, known today as Lake Aydarkul, its length exceeds 250 kilometers, and the width is 15 kilometers.

Today, a giant mirror of the lake is 3000 square kilometers and it is situated at an altitude of 247 meters above sea level. Mineralization of water is between 3-5 grams per liter in the east, and up to 8 – in the west, moreover it provides a wonderful bioorganic habitat for flora and fauna environment. On the shores of this manmade wonder many species of birds in the Red Book found the shelter, some of the are like Dalmatian Pelican, small Cormorant, Red-breasted Goose, Lesser White-fronted, white-eyed dive, Pallid Harrier, White-tailed eagle, black vulture, etc. According the number of mammals species, most of which are native only for this area, the areas of the lake far ahead of all other areas of the country.

Of course, the most exciting adventure in Aydarkul - is fishing. And it is precisely for these hundreds of tourists come here from all over the country. Lake simply abounds in fish and in addition to traditional forms, such as: carp, carp barbel, chub, perch, catfish, bream, it will not be difficult for a seasoned fisherman to catch such species like snakehead, Marinka, Tupac or Samarkand hromulya – which are Central Asian native fish species.
Aydarkul – is a secluded from civilization, original, untouched by the world where there is always a place could be found for refuge and rest of weary soul. 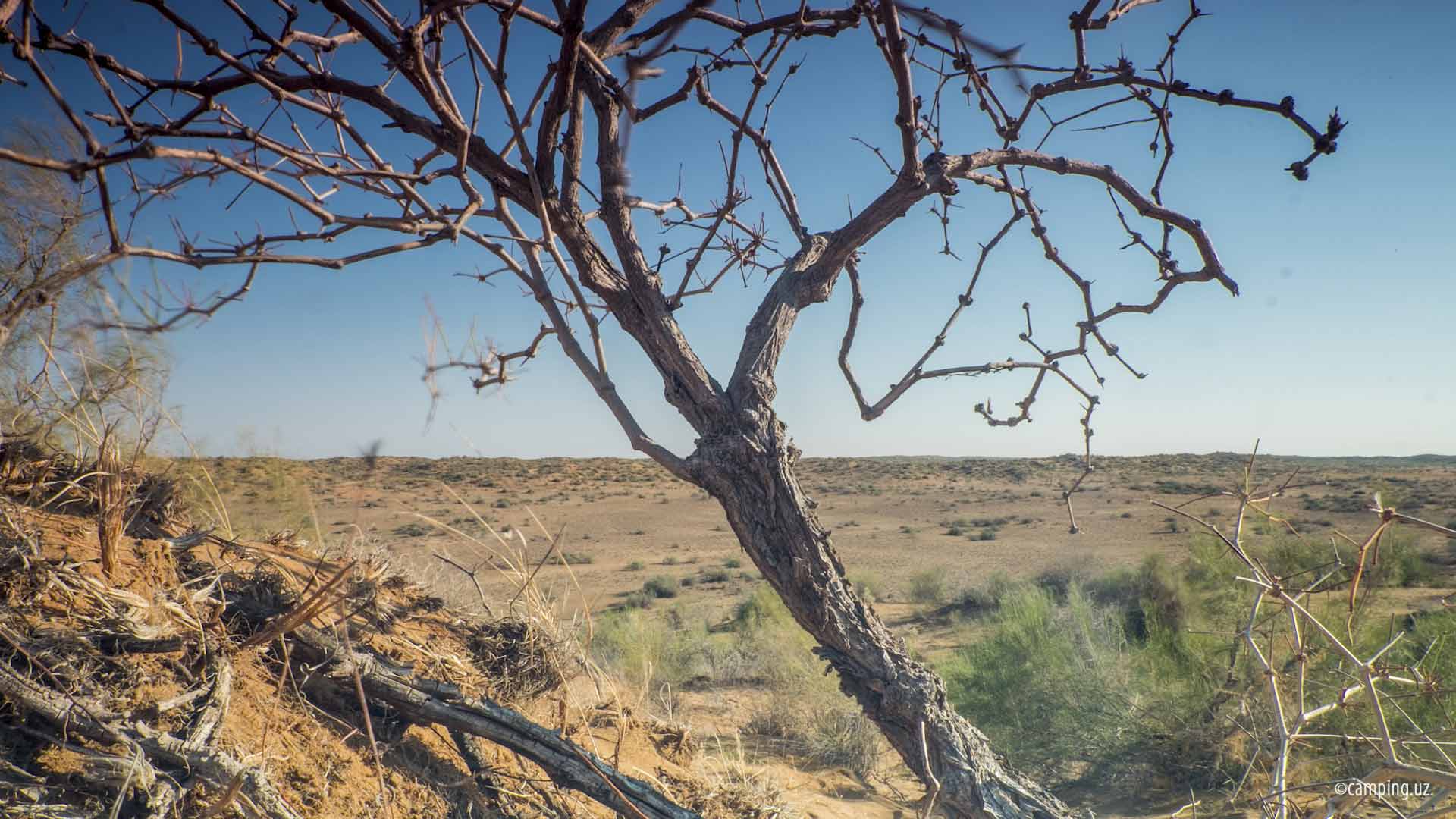 The Kyzyl Kum, or Red Sand, Desert covers about 115,000 square miles between Central Asia’s Amu Darya and Syr Darya rivers. Much of Uzbekistan and parts of Kazakhstan and Turkmenistan are carpeted by the dunes and sparse shrubbery of this desert. Both the Amu Darya and the Syr Darya flowed into the Aral Sea, and their diversion for cotton irrigation contributed to the sea’s disappearance.

The Kyzyl Kum nature is very diverse. It is home to the antelope-gazelle, jerboa, various kinds of ground squirrels, the tolai hare, wolf, corsac fox, lark, jay bird, bustard, steppe eagle, owls, snakes (including venomous viper), lizards, varans and even turtles. The desert flora is also rich: wild tulips can be found in spring, sand sedge is common for the sands, while sagebrush and other shrubs, for the clay ground; white and black saksaul can also be met there.

The Kuzylkum population is mainly engaged in karakul sheep breeding. Land reclamation is common for the outskirts, development of deposits of useful minerals, for the center of the desert, near Uchkuduk, where large deposits of uranium, gold and other natural resources were found. A hundred kilometers to the south from Bukhara there is Gazli, the town known for one of the largest gas fields in Central Asia. 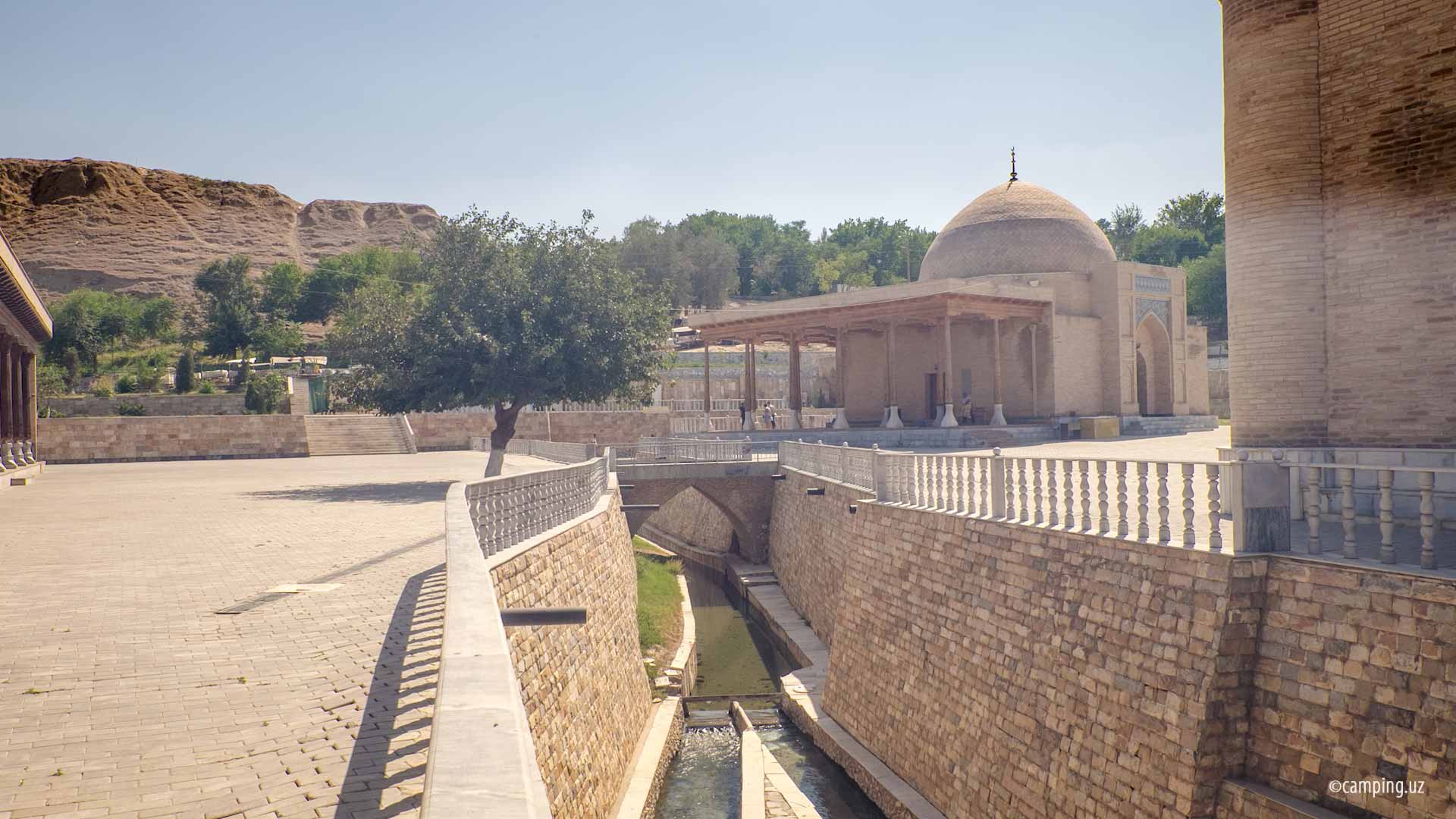 A small town Nurata is located in the foothills of Nuratinsk mountains range, 200 km from Samarkand. Nurata is the administrative and cultural center of the mining district of Navoi region.

Legend says it that the city appeared many centuries ago, after the fall of the meteorite. At the ”firestone” crash site a spring of healing water occured. This explains the name of the city, “Nurota” means “father beam” or “ray-father.” Local people say that sometimes a strange glow appears on the spring. Nurata really an amazing place – as soon as you enter the town, you see surprising landscape-on one side is the margin of the Kyzyl Kum desert, on the other – the eponymous rock boulders range.

Nurata is located away from major industrial and tourist centers. In Nurata people live measured life, respecting the traditions and customs of their ancestors. The population of the town of just 25,000 people, who live in kindness, friendship, and are renowned for their hospitality. While in the 4th century BC the city occupies a strategic position. Fortress Nur served as protection of the city, and it was built by Alexander the Great. Today, a small town Nurata became a pilgrimage for the religious people. One of the most important centers of Islam is complex “Chashma”, which is visited by thousands of devotees not only from neighboring cities, but also from other countries.